October 25, 2015
For years I've been interested in home automation. I've had remote controllable outlets from a few different manufacturers but I've never been quite satisfied with just the remote. What if I could control my outlets within my local network from any device, now that's something I wanted to have.

A few years back I bought a three pack of remote controllable nexa outlets. A while ago I discovered that another company manufactured a control unit that's plugged in to a USB port and best of all they provided linux software for it.

To make full use of these I'd need a computer that's always on and that's where I could make use of Raspberry Pi.


I had already set up my outlets with the remote that came in the retail pack just follow the manufacturer instructions.
It might be possible to configure the outlets completely via the software at least for some brands but I haven't tried it so I can't be sure.


To make use of the Tellstick Duo control unit Tellstick provides software and easy to follow instructions. Important thing here is to install both applications telldus-core and tellduscenter.

The telldus-core is the software that does the actual controlling and tellduscenter provides a GUI that I found necessary to configure the outlets for telldus-core.


To pair the outlets with tellstick software I used the tellduscenter's outlet scanning option. With this option my outlets respond to the remote and the tellstick duo controller unit.

My first thought was that I could create I library that would execute the telldus software commands and I could then wrap that to a REST service and build a simple HTML and JavaScript UI that would in turn communicate with the REST service.

After the first idea I figured that someone must have already solved this problem in some way and I started to look for solutions that others had created and then I came across with remotestick-server that did exactly what I wanted with the exception that it produced XML.

As I wanted a simple UI that I could use from any device I also added some HTML, CSS and JavaScript to the same codebase as it could be served via the same software so no need to complicate things and create a separate application for the UI.


Now I have a partly DIY home automation for outlets with a simple UI to use from any device in my home network.
Next step is to add more outlets and maybe some scheduled automation. 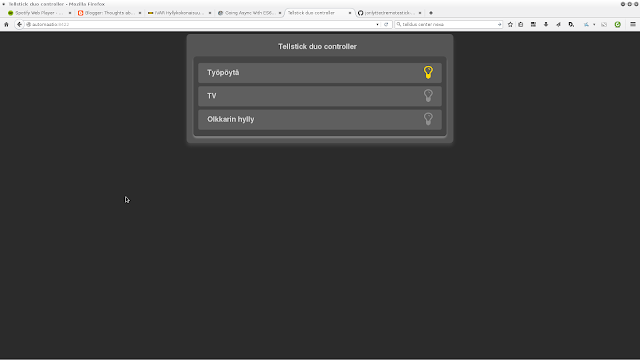 Turning lights on and off

September 13, 2021
Readability, understandability, two key incredients of great code. Easier said than done, right? What one person finds easy to read and understand another one finds incomprehensible. This is especially true when programmers have different levels of understanding on various subjects e.g. object oriented vs. functional or Node.js vs. Java. Even though there are obvious differences between paradigms and programming ecosystems there are some common conventions and ways to lower the barrier. Different approaches It's natural that in programming things happen sequentally e.g. you can have a list of objects and you need to do various things to the list like filter some values out and count a sum of the remaining objects based on some property. With the given list const stories = [   {name: "authentication", points: 43},   {name: "profile page", points: 11},   {name: "shopping cart", points: 24},   {name: "shopping history", points: 15},   {name: &qu
Read more

Sharing to help myself

May 18, 2014
It's been a while since my last post but I have a good excuse. I've been in a new customer project (well new for me) for two months now and have absorbed a lot of new information on the technology stack and the project itself. This time I'll be sharing a short post about sharing code and how it can help the one who's sharing the code. I'll be giving a real life example of how it happened to me. My story Back when I was implementing first version of my simple-todo REST-service I used Scala and Play framework for the service and specs2 for testing the implementation. Since then I've done a few other implementations of the service but I've continued to use specs2 as a testing framework. I wrote about my implementation and shared the post through various services and as a result someone forked my work and gave me some pointers on how I could improve my tests. That someone was Eric Torreborre  the man behind specs2 framework. I didn't take his ref
Read more

June 21, 2021
Immutability is a special thing that in my mind deserves a short explanation and praise. If you're familiar with functional programming you surely recognice the concept of immutability because it's a key ingredient of the paradigm. In the world of object oriented programming it's not as used and as easy to use approach but there are ways to incorporate immutability to parts of the code and I strongly suggest you to do so. Quick intro to immutablity The basic idea of immutability is unchangeable data.  Lets take a example. We have a need to modify a object's property but because the object is immutable we can't just change value but instead we make a copy of the object and while making the copy we provide the new value for the copy. In code it looks something like this. val pencil = Product(name = "Pencil", category = "Office supply") val blackMarker = pencil.copy(name = "Black marker") The same idea can be applied in functions and metho
Read more
Follow @JoriLytter