August 11, 2017
I've had my DIY home automation system for controlling outlets and reading sensor data running for about two years now. The system has been working fine and I haven't had any need to touch the code since I added the sensor reading to it, until a few months back.


Few months ago I got a new IoT toy for a lend from a friend until I'd get my own toys, a ruuvitag sensor beacon. Ever since I found the ruuvitag for the first time from kickstarter I had the idea of getting a bunch of ruuvitags and adding their weather station sensor readings as part of my home automation system.

The original home automation backend included only tellstick compatible devices and was written in Python, and in my mind it was kind of a hack. The ruuvitag beacons communicate via BLE i.e. Bluetooth Low Energy and that meant that I needed to add functionality to read the beacon data via bluetooth.

I found a ruuvitag Python library and initially thought that I'd just use that and extend the existing backend. As I started looking more into the ruuvitag and BLE beacon possibilities I came accross Node.js implementation that would be able to read the beacon data. As I started looking deeper and extended my search within Node.js libraries I also found a telldus library.

I've done some work with Node.js and even though it's not my first go-to choise it seemed that with it I could simplify my existing backend a lot and add the new functionality quite easily.


I'm not going to get in details of the backend code as it's basically a REST API that reads sensor data and controls outlets just like the original implementation but here's a link to the backend code and just a few notes about the backend.

The Node.js telldus library uses the native telldus library and is compiled with node-gyp so it needs to compiled on same architecture where the backend is going to be running. The compile time on my original Raspberry Pi was quite long.

The beacon library uses bluetooth library and it has the same restriction as the telldus library.

The readme file contains more information and instructions in case you're interested.


The UI of the original home automation system was a vanilla JavaScript experiment and I thought that I should also update that as I already rewrote the backend. This time I chose Vue.js as it's something on the rise and I haven't used it before. Just like with the backend I'm not getting in the details of the code but here's a link to the code and a screenshot. 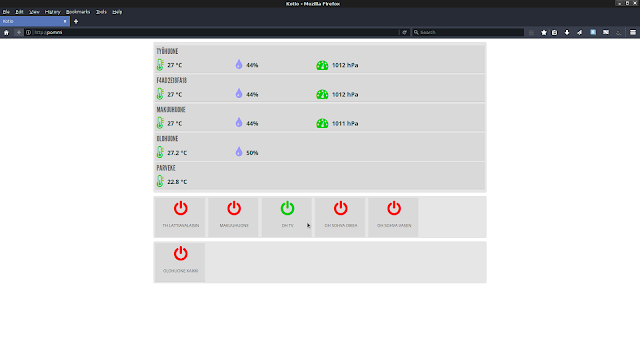 Wait, what, no tests!


I made a conscious decision not to write any unit or integration tests for this project as without all the hardware (tellstick duo, controllable outlets, bluetooth, ruuvitag) I'd have to mock them and I'm not a big fan of mocks.

Sure i could have written a unit test for parsing the sensor data from the beacon URL but it just didn't seem worth the time and effort as I have manually tested the implementation for hundreds of times while developing.

Integration testing has also been manual while developing and continues to be manual as we use this system daily so I didn't see the need for automating that.


The rewritten backend of the home automation system seems to be working as reliably as the first generation and I'm really pleased how much cleaner code I got with Node.js.

Vue.js seems to be a viable option at least for small projects like this one.

I already have some ideas how to do some actual automation and analytics based on the sensor data but that's another story.

P.S. I wish my ruuvitags had a light sensor as that would extend the automation possibilities even more.

September 13, 2021
Readability, understandability, two key incredients of great code. Easier said than done, right? What one person finds easy to read and understand another one finds incomprehensible. This is especially true when programmers have different levels of understanding on various subjects e.g. object oriented vs. functional or Node.js vs. Java. Even though there are obvious differences between paradigms and programming ecosystems there are some common conventions and ways to lower the barrier. Different approaches It's natural that in programming things happen sequentally e.g. you can have a list of objects and you need to do various things to the list like filter some values out and count a sum of the remaining objects based on some property. With the given list const stories = [   {name: "authentication", points: 43},   {name: "profile page", points: 11},   {name: "shopping cart", points: 24},   {name: "shopping history", points: 15},   {name: &qu
Read more

Sharing to help myself

May 18, 2014
It's been a while since my last post but I have a good excuse. I've been in a new customer project (well new for me) for two months now and have absorbed a lot of new information on the technology stack and the project itself. This time I'll be sharing a short post about sharing code and how it can help the one who's sharing the code. I'll be giving a real life example of how it happened to me. My story Back when I was implementing first version of my simple-todo REST-service I used Scala and Play framework for the service and specs2 for testing the implementation. Since then I've done a few other implementations of the service but I've continued to use specs2 as a testing framework. I wrote about my implementation and shared the post through various services and as a result someone forked my work and gave me some pointers on how I could improve my tests. That someone was Eric Torreborre  the man behind specs2 framework. I didn't take his ref
Read more

June 21, 2021
Immutability is a special thing that in my mind deserves a short explanation and praise. If you're familiar with functional programming you surely recognice the concept of immutability because it's a key ingredient of the paradigm. In the world of object oriented programming it's not as used and as easy to use approach but there are ways to incorporate immutability to parts of the code and I strongly suggest you to do so. Quick intro to immutablity The basic idea of immutability is unchangeable data.  Lets take a example. We have a need to modify a object's property but because the object is immutable we can't just change value but instead we make a copy of the object and while making the copy we provide the new value for the copy. In code it looks something like this. val pencil = Product(name = "Pencil", category = "Office supply") val blackMarker = pencil.copy(name = "Black marker") The same idea can be applied in functions and metho
Read more
Follow @JoriLytter